From Phildrinkwater photography: “This tiny Greek Island is currently the destination of choice for couples looking for a European wedding.
Find out why..
Santorini has some of the most beautiful coastalviews … anywhere! It’s such a unique option for those with wanderlust in their hearts.

Santorini Gem, where they had chosen to be married, takes pride of place on the South side.

The day begins
Carla and her bridesmaids (and bridesmale) spent a fun morning together laughing and joking with Helen, their MUA while they were pampered and sprayed.

Meanwhile, the guys were preparing together with family. It was late afternoon and the sun was really beating down by this time, but they still looked totally cool in their sunglasses.

At Santorini Gem
As the guests walked in, they were blown away by the setting and it was photo time by the cliffs. Carla soon joined them, greeted by a tearful Lee, who was overjoyed to see her.

After a ceremony in front of the incredible views, they were congratulated by friends and family and we spent some time taking photographs. What a location! I almost didn’t know where to start!

And the sun sets..
As the afternoon waned, they were seated for dinner and an emotional set of speeches.

They looked so incredibly happy as a newly married couple with the sun setting behind them.

The final duty of the day – a first dance in front of the fiery sky – made way for much more fun dancing, and I left as the cigars were lit. ” 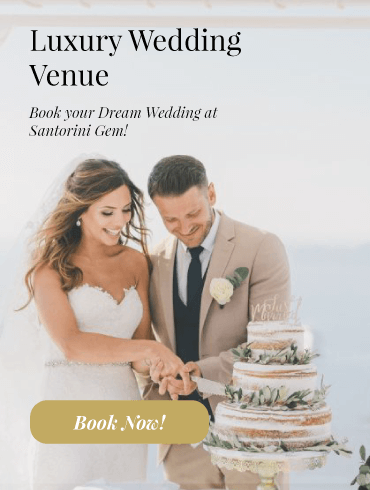